JBay Solutions Development Blog on Java, Android, Play2 and others

A very common question from beginners in Java is "What does Static means" or "What is Static in Java". It is actually very simple.

To better understand what is meant by that, let us rewind a bit!

When writing a Java program, a programmer writes Classes and creates objects of those Class types, or other Class types that belong to some libs. So, look at this Class:

This Class simply holds a number in a public variable called number. If we wanted to use this class we would need to instantiate this class to create an object, and then use that object to store the value on the variable, just like so :

If we would print the value of the "number" variable inside the holder1 object like so:

Now, if we wanted to hold two numbers, we would need to create two objects of type NumberHolder and assign the values to them, like this:

Printing the values of the number variables inside of each of the NumberHolder objects :

So, each of the objects has a variable that belongs to that specific object of class type NumberHolder.

Now in some cases there is a need to have a value that is shared across every instance of a particular class, and to do this, we use Static. Now, bear in mind that making something Static has several implications, that we'll see a bit further down.

Something that is static

So, now we'll create another class that we'll call TotalHolder , which looks somewhat like this:

Very simple. Now, we'll create two instances of TotalHolder and do some assigning to the total int variable and see what happens:

If we run this code we get an output like this:

So, as you can see, the value of the variable total, when being accessed through either of the TotalHolder instances will have the same value..... that is because it is exactly the same variable that is being accessed, not two different variables that share the same value, but the same exact variable! In fact, the static variables (or methods) don't even belong to the Instances of objects, but to the Class itself... and to illustrate that I've made two pictures : 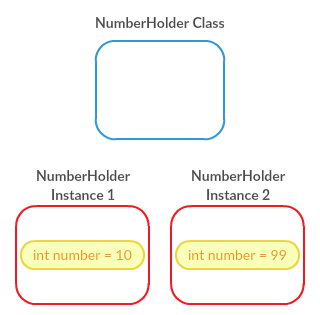 As for the Static example, look at this image: 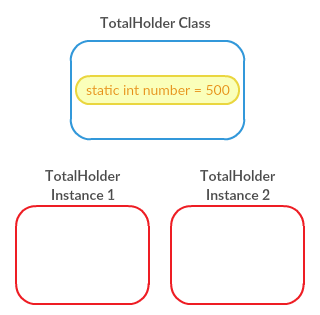 Because the variable total is static, it does not belong to the Instances of the TotalHolder, but to the class itself. Which means that when accessed, through whatever instance of the object, it will be in fact the Class variable that is being accessed.

But that is not all..... because the static variables (and methods) belong to the Class, we don't really need to have Instances of the objects to access those variables, which means that the previous example code, code be re-written like this:

Notice that in this example we are not using any Instances, but instead accessing the total variable through the Class... which is completely legal, because the variable belongs to the class.... because it is static.... is it making sense?

OK, lets recap a bit, cause this really needs to be second nature:

So, to have have a variable that is shared with all Instances of a Class type, we can use a static Variable.

But what about methods? What are the benefits of having Static methods? Are those really needed?

We'll focus on the benefits first!

Because a Static method can be accessed through the Class, there is no need to create an Instance of the class to get access to the methods, which can be very useful with memory management... less instances, less memory used, less GC , less everything! But this is not all. In terms of code style and code reading.... it just makes everything much more readable and easy to understand, if used properly.

One good, and very common use of Static methods, is to create Util classes. Util classes is not an official designation I think, but what I mean by that is a Class that has useful methods (that are usually isolated) to perform certain common tasks, such as for example a Math util class, which could look like this:

This is obviously a very simple class, but you get the idea! To use this class to make some operations, we would do something like this:

Really easy to read, isn't it? And notice, because we didn't create an Instance of the MathUtil Class, we are actually saving memory! Now imagine that in the ultra massive bank accounting system that you are developing using Java, if these methods were not static, and these operations needed to be done in several places, all the time, you would be creating MathUtil Instances all over the place, you would eventually use a considerable amount of memory, which would also at some point would need to be Garbage Collected..... and not to speak of the object Instantiation times.... you see? Static methods are a solution to these issues. Obviously that in a concurrent environment you would also need to have in mind concurrency considerations, but that is beyond the scope of this tutorial ( Check this Concurrency Tutorial if you are interested ) .

The big rule with Static methods is that, if you are accessing anything outside this method, that something also needs to be Static.

And this makes sence.... lets think about this for a second: If you are calling a Static method, and you know that a static method belongs to a Class and it can be accessed directly through the Class, if that method were to access a non-static variable, which would belong to a specific Instance, the VM wouldn't know which of the instance variables it was refering to, or even worst, if there were no Instances at all created, what would happen?

So, as you can see, having a static method accessing variables or methods outside of the scope of the method is illegal and your code won't compile... because it makes no sense.

And yes... there is more! Lets talk about static blocks!

You know what a block is, and static block is not very different and looks like this:

Think of static blocks that a Class can have as a Constructor for the Class. What happens is this: When you start you program on the JVM, classes get loaded into memory, this is where the Classes will live, and will be available to create instances, and access static variables and methods.

When a Class is loaded into memory, the JVM will initialize the static variables that exist on the Class, and will execute all the static blocks of the Class, in the order they are presented, always in that order.

Obviously, static block behave like static methods in the sense that they can only access static variables and methods that exist outside of the scope of the block, because.... specially at this time, when the static blocks are being executed, there will be no instances of those classes.

And this is it! We hope this was useful, and leave us any comment you would like to share or any doubts you may still have.